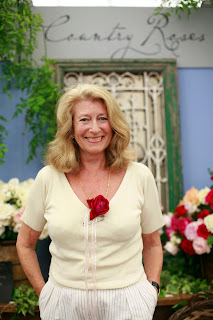 gathers steam this week, preparing for another hot garden weekend, I have a moment to draw breath and reflect on our time at .

is the biggest garden show in the world. Its expanse and breadth and sweep of imagination brilliantly combined with the precision of a military campaign, orchestrated of course by the RHS.  The first thing I remember about arriving at cock’s crow on the Sunday morning is the megaphone instructing drivers when to enter and leave the site, in serried rows, lined up in different parts of the magnificent ancient deer park. The last thing I remember as eight days later we staggered home exhausted, carrying perfumed roses, bruised foliage, the occasional scoop of soup from the Covent Garden Soup Kitchen and roses from Peter Beales - the award-winning growers who were across the way from our stand, is the sound of the booming voice telling the rose vans when the leave and which of the next floral vans should line up for their timed exit,  filled, like ours, with empty buckets, secateurs and florist wire. 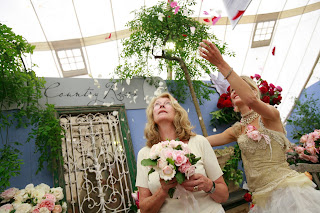 We won a bronze medal, much to our surprise. It is the first time we have ever attempted a huge exhibition, usually comes too early for roses grown and cut only in this country, and our other experience was the Great Autumn Show in two years ago, when we also won a bronze. 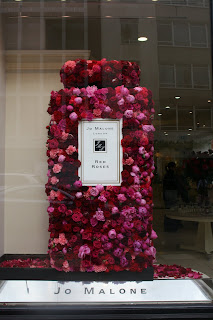 Last year at Chelsea we provided roses for Zital Elze and for the windows of Jo Malone both of whom won medals for their displays. At Hampton Court this year, David Austin and Country Roses were the only businesses to exhibit cut English cut roses and we were the only ones to earn a medal.

There were …(500?) exhibitors at Hampton Court and I didn’t think we had a prayer of winning. But then people were praying. I think our beautiful Country Rose bride Flora Neville, daughter of the Vicar of Forham (who was definitely praying) and grand-daughter of the architect Quinlan Terry, who was wearing a divine Jane Bourvis vintage wedding dress as Titania in her magic wood, might have swayed the judges a little. Rupert Ely told me, amused and I like to think intrigued, they had never had a ‘living being’ as part of the exhibit before, and the judges told Flora she was ‘making RHS history’. As she was indeed the spirit of Country Rose Weddings it seemed a good omen! 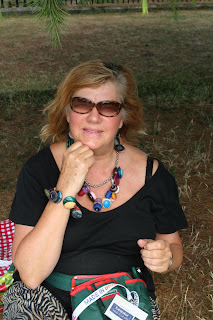 And as it turned out, it was. Top marks for courage and eccentricity I would say, even if we are not polished professionals we love our flowers and work with nature and imagination. My dear friend Trisha Edwards, who herself was nominated for an Emmy during our week at Hampton Court, had helped create an extraordinary mise-en-scene for the Midsummer Night's Dream them

Fittingly, on Monday, press day, Judi Dench, whose poster from the Royal Shakespeare Company's performance of Midsummer Night's Dream in the early Sixties featured her impudent smiling face as Titania and swung above our stand - came to receive a rose.

On Wednesday night, July .. the BBC showed their film of us, shot the previous week in our rose gardens, showing Flora collecting fresh petals, me cutting for a wedding, my brilliant head pickers, Vanessa and Lynn, preparing and packing rose orders as they went out from our barns. On Wednesday morning Rachel de Thame came to interview me on our stand and on Thursday night it went out on Gardeners World as a special from Hampton Court. 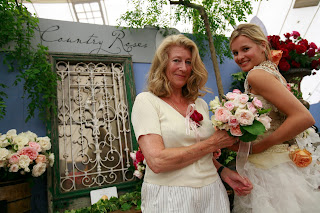 Next day people came streaming into the Rose Marquee asking for 'the lady who was on the telly' and the girl in the beautiful wedding dress. That went on until we packed up on Sunday, but Flo had to be elsewhere on Saturday and Sunday, although she had floated around in her vintage lace, studded with real scented roses (pics) every day until Friday. So I had to explain that our bride was wilting in the extreme heat (on Friday and Saturday it was 100 degrees and felt like walking through the desert with 50,000 other people), and I draped the dress rather elegantly, still studded with roses, with a small bridal bouquet tucked into the tulle, across the wonderful stately old garden chair lent to us by Mark Farley of Farleys Props. 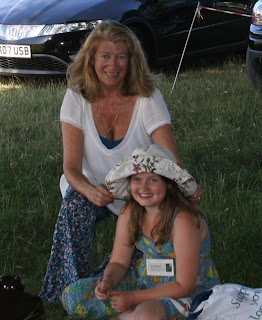 On Saturday I braved the heat again with my grandchildren and to cool off we took the ferry across the river and back again. The roses by that time were really gasping for air, and I wished we could have taken them with us across Long Water to play in the shade of the old oak trees.

From this ten day marathon have come requests, parties, weddings, bouquets – so we are now battling the elements again to make sure our roses are up and running again from their July lull, between the first flush and the next.  They are comin on in the greenhouse, used last weekend as a concert hall, and in the fields this rain has helped combat the dry heatwave of the weeks before. 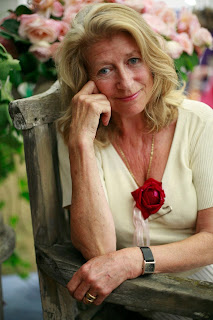 On Tuesday Brides magazine were working with the roses:……….. for a shoot in a house – and next week YOU magazine is sending down a photographer to Josselyns to photograph the rose gardens, the house and us.